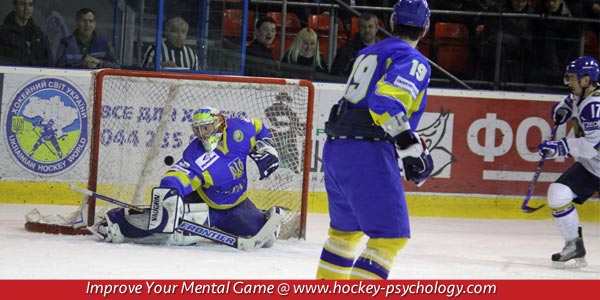 Having A Champion’s Mindset

Does your confidence wax and wane depending upon the score in a game? How do you respond when you are losing late in a game? Your response to a situation is guided by your mental toughness in hockey. Your mental game can be your greatest asset or worst enemy. Your mental toughness in hockey can push you to greater heights when the game is on the line.  Your attitude can provide that needed boost allowing you to reach down deep inside and find that extra effort and intensity to win.

The Women’s Canadian hockey team has displayed a “championship attitude” throughout the last decade. Team Canada entered the Sochi Games having won 18 straight games at the Olympics including gold medals in 2002, 2006 and 2010.  Despite Team Canada’s dominant past performances, they expected some strong competition from their rivals, the US team.

The 2014 Olympic gold medal game against the US team was a true test of Team Canada’s mental toughness. The US took a 2-0 lead 2 minutes into the third period. With time dwindling down in the final period and the gold medal in jeopardy, the Canadian team responded by scoring with 3:26 remaining in the game. Team Canada was still behind, 2-1, with 55 seconds left in the game. With the game on the line, the Canadian team remained confident and pulled their goaltender in favor of an additional attacker… and attack they did. Canadian forward Marie-Philip Poulin scored the equalizer with less than a minute to tie the game, 2-2, and force a sudden death overtime period.

Canadian center and four-time gold medalist Hayley Wickenheiser credited Team Canada’s attitude for their uncompromised determination, “We battled so hard, and we never gave up, and we just put everything on the line to get the job done. We had a lot of composure and experience to pull through in the end when we needed to, and to stay in the moment.”

Wickenheiser stated that Team Canada continued to focus on playing their game despite the score, “I think it comes down to making the plays out there when they’re there, keeping your head about you and knowing that no matter what a pressure cooker it is, it’s ultimately another game against another really good team.” Wickenheiser and Team Canada’s mental toughness provided them with the needed advantage to find a way to win, “I think our team has the experience and composure. When the chips are down, we know how to win.”

Developing the Attitude of a Champion: