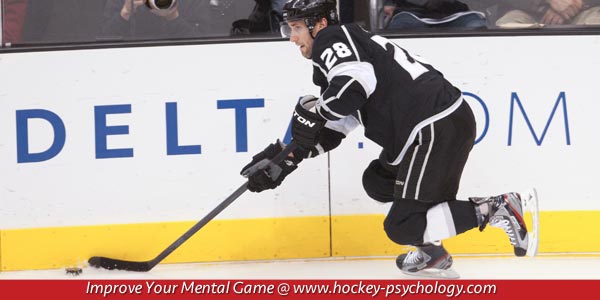 Are you able to rise to the occasion and play your best hockey when your back is against the wall and your team is down?

When your team is facing elimination, do you focus on the potential outcome or are you able to focus on taking your game to another level?

Being on the brink of elimination can cause some hockey teams to abandon all hope.

Sometimes, you become defeated before the next game even starts which dramatically interferes with your performance on the ice.

When facing elimination from a tournament, mentally tough teams manage to focus on the game at hand instead of the fear of losing.

Mentally tough teams look for evidence to support the possibility of a comeback rather than replaying mistakes and tough losses.

Mentally tough teams realize the only game that they can effectively impact is the current game.

The games in the past have already been determined and you cannot change their outcomes.

Focusing on the past wastes your time and energy negatively affecting your present performance.

The New York Rangers were facing elimination, down to the Los Angeles Kings 3-0 in the 2014 Stanley Cup finals heading into Game Four.

The Rangers lost the first two games in the series in overtime despite never trailing at any point during regulation.

Making matters worse, the Rangers were playing Game Four away at the Staples Center.

The Rangers had their backs against the wall but responded favorably to the challenge.

The Rangers showed their mental toughness, dug deep and rose to the challenge winning Game Four 2-1.

Rangers right winger Martin St. Louis recalled the recipe for Rangers comeback in their quarterfinal series against the Penguins after being down three games to one.

“We’re focusing on one game. We’re not trying to look at the big picture right now. We’re going to go play one game… So we’re going to keep pushing. Belief is everything,” said St. Louis.

LUNDQVIST: “I think it’s important that you don’t feel sorry for yourself. You’re disappointed and upset you’re in this position. But at the same time you have to accept it and move on and get ready for the next game.”

Lundqvist rose to the challenge despite facing elimination by making 40 saves to help keep the Rangers in the hunt for the Stanley Cup.

LUNDQVIST: “When everything is on the line, you just have to challenge yourself the right way. You have to leave everything out there and be extremely focused.”

Try these tips when mounting a comeback:

You have a choice… you can relive the past or leave your mark on the present!