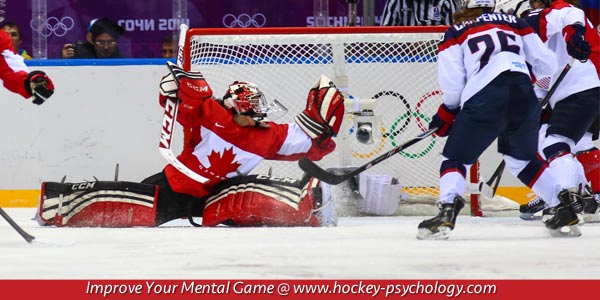 Everyone has heard the expressions, “Sometimes you win, sometimes you lose,” and, “It’s better to be lucky than good.” The inherent problem with both sayings is that they minimize the importance of the sense of control for an athlete. When an athlete does not believe that his actions or mental game have an effect on outcomes, it can lessen his level of effort, motivation, confidence and ability to persist in the face of adversity. A more advantageous mantra would be “Sometimes you win, sometimes you learn.”

The Toronto Maple Leafs, 17-15-3, had some ugly wins recently but failed to learn from their losses. Recently, the Leafs gave up 50 shots in a win against the Dallas Stars and then, three nights later, they gave up 50 shots in another win against the Ottawa Senators. Leaf forward Nazem Kadri was satisfied with the wins but he neglected to evaluate how the team performed, “They don’t ask how. They ask how many.”

The Leafs have one of the worst shot-differentials in the league but, to the players, victories are all that matter, not improvement! This type of mentality lacks the evaluative component that championship teams adopt in order to continue improving throughout the course of the season. In the last ten games, the Leafs have played poorly with a record of 3-6-1. In a game versus the Boston Bruins, the Leafs suffered a 5-2 loss due to their lackluster play. The second period seemed to be the downfall for the Leafs who were outshot 17-9 and allowed two power-play goals. Last year, the Leafs had a respectable penalty killing success rate at 87.9 percent but are currently ranked 26th in the league at a mere 77 percent.

Championship teams seek daily improvement to maintain their mental game edge rather than relying on luck, doing just enough to win or waiting for their teammates to take over a game. When a team goes through the motions without mental intensity, they lose focus on what they can do to impact a game. Eventually, the lack of focus can hurt confidence and affects the team’s ability to overcome adversity. When you lose your mental edge, you start believing that your performance doesn’t affect the outcome of games and you no longer play with all-out effort.

Jay McClement, Leafs forward and penalty-killing specialist understands the importance of learning from mistakes and improving how the team plays, “Once you lose confidence in something, it’s tough to get it back. When we were going last year, we had almost a certain swagger about it. We expected to kill it and we were all working together. Right now, we’re making tiny mistakes and it seems like we’re not getting away with anything.”

When you seek to improve your level of hockey daily: