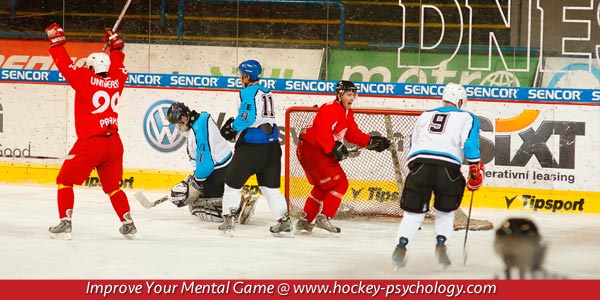 What Makes Up a Strong Mental Game?

Would you rather be a favorite to win or be the underdog–heading into a championship game? Being favored implies you have more ability than your opponent and, let’s be honest…

Who wouldn’t want to have more natural talent? Unfortunately, more ability doesn’t guarantee victory. Winning is a team effort that requires team members to have a strong mental game.

A strong mental game can give you an edge and take you from “underdog” to “top dog.”

A strong mental game consists of strong belief in your ability to achieve a desired result, the ability to focus your attention on the process, and high trust in your skills.

A strong mental game allows teams to overcome a stronger opponent or favorite.

I was happy to see that Union College won its first NCAA hockey title Saturday night, rebounded from a 2-1 deficit and scored three times in a 1:54 span in the first period.

Union never relinquished the lead en route to a 7-4 victory over Minnesota.

Union College is a small liberal arts school in Schenectady, New York. My brother, Marty Cohn, attended Union College back in the late 70s where he played on both the hockey and football team. He would have been thrilled to learn that Union won the NCAA Championship.

Four facts highlight the extraordinary nature of the Dutchmen’s victory

How did the “underdog” Dutchmen become NCAA champions? Union’s strong belief in their skills, teamwork, and style of play made the difference.

Mat Bodie, the Union captain stated the team learned to focus on the present moment with the help of their sport psychologist:

“Just one shift at a time… This is the biggest game of our lives, hands down, but you’ve got to treat it like any other game. It was tough, I had people texting me, people calling me and stuff, and, you know, it was real tough to keep that mindset, but with our sport psychologist we were able to get that done.”

Even when down 2-1 during the first period, Bodie said the Dutchman remained confident and focused on their game:

“I don’t think much changed. We didn’t change our game plan. We tightened it up a little defensively… We just wanted to stick with our process. We felt we were playing pretty well and, you know, great things happen.”

You, too, can beat a favored team if you are committed to doing the physical and mental work