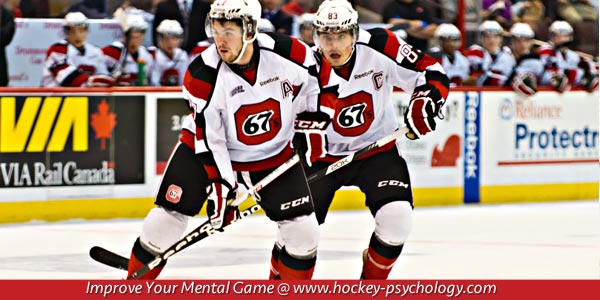 A “Playing to Win” Mindset in Hockey

What does it mean in hockey to “play your game?” “Playing your game” simply put means taking advantage of your strengths and dictating the course of action on the ice.

When you compete from your strengths, such as your stick-handling, you play to win as opposed to playing not to lose.

The mindset of playing to win is a significant advantage to hockey players. It is a proactive approach that puts you in the driver’s seat instead of reacting to what your opponents are doing.

It puts you a half-step ahead of your opponents and boosts your confidence during games. Playing to win gives you a positive focus throughout a game and helps you rebound quickly from mistakes.

A “playing to win” mindset

The Boston College Men’s Hockey Team has won the National Championships three times (2008, 2010, 2012) in the past six years and are preparing for another championship. Head coach Jerry York understands the importance of playing to win and not focusing on the past, “We’re not necessarily concerned with what happened yesterday or the day before.  We’re focused on how well we play Saturday afternoon [the current game].”

Isaac MacLeod, BC senior defenseman stressed that right mental approach gives a team the best opportunity to succeed, “When you get to this point in the season, all the teams that are still playing are good teams. Every game is going to be hard to win. As long as we play Eagle hockey for a full 60 minutes, I think we’re giving ourselves a good shot.”

In order to “play to win”

Remind yourself… no matter how the game unfolds, the only chance you have to play optimally is to play your game and compete from your strengths.

Improve your confidence in hockey today with The Confident Athlete Workbook and CD Program!