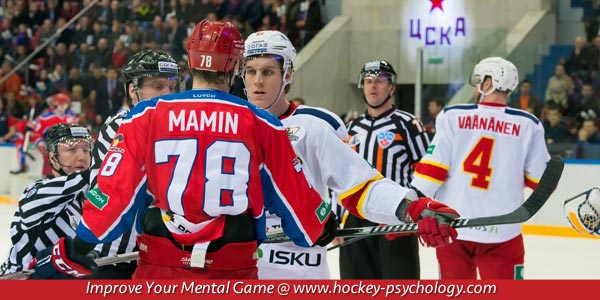 Managing Your Emotions With Mental Toughness

How do you respond during a hockey game when the puck is not bouncing your way?

When you do not have your “A” game, can you still find a way to win?

It requires mental toughness to manage your emotions when things are not going your way.

By not continuing to grind it out, you give the opposing team a huge advantage and, quite possibly, the game.

Mentally tough teams keep playing their same style of play and seek to capitalize on their opportunities.

A mentally tough team can make some mistakes or be “off their game” but still press forward and find a way to win.

In Game 1 of the 2014 Stanley Cup finals, the LA Kings were down 2-0 to the NY Rangers as the first period neared the end…

But the Kings kept battling and scored before the period ended…

Despite losing his cool after an errant pass lead to a Ranger goal, Kings defenseman Drew Doughty pushed forward and scored to tie the game 2-2 in the second period.

DOUGHTY: “When I get angry I kind of turn it on. I try to throw my emotions in the right way. Yeah, it’s a bad turnover. I wasn’t happy with myself. I didn’t want to try to do too much to make up for it. I had to be a better player than I was on that play.”

The Kings out shot the Rangers 20-3 in the third period but were unable to score and the game headed into overtime.

The Kings were not playing their best hockey but kept battling, looking for opportunities and kept themselves in the game.

The result was a goal by Justin Williams, right winger for the Kings, four minutes into overtime for the victory.

Williams said the Kings pressed forward knowing they have overcome similar situations during the season.

WILLIAMS: “It certainly helps that we’ve done it time and time again. It’s a great result of the hockey game for us… Certainly [this was] not our best game by any standards, especially ours. But we were able to get it done. That’s the most important thing.”

Try these tips when you don’t have your “A” game: