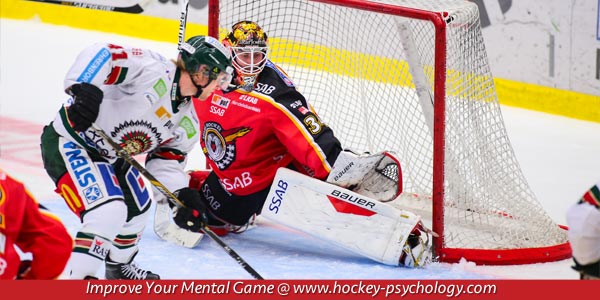 Troy Brouwer, 28 year-old right winger for the Washington Capitals, has experienced a difficult 2013 season. Brouwer signed a three-year contract extension in 2012 with an annual salary of 2.35 million per year but has not performed up to expectations. Through the first 28 games of this season, Brouwer recorded only five goals and 4 assists. At one point, Brouwer scored only one goal over a 15 game span.

Brouwer feels he has been over-thinking this season which has affected his performance and confidence, “There are certain aspects of my game that I’m not happy with… puck control in the corners and being able to make an outlet pass — something you should be able to do when you’re a little kid — but for some reason I’m having a little trouble with it. [I’m] just out there trying to get a little bit better, trying to improve my game and just get more confidence.”

Adam Oates, head coach of the Capitals, recognizes how a player can be adversely affected when he over-thinks and tries to do too much. Oates wants Brouwer to focus on his overall game rather than his offensive statistics, “I talked to him about a week ago [and told him] that ‘You’re vital to us. Numbers are irrelevant… You’re a top-six forward, versatile, and like I’ve always said, I don’t care about numbers. Just play.’”

It is important for a player to quickly get into the flow of the game. Changes to routines and personnel can take a player out of his comfort zone and cause him to over-think and try to make things happen. Brouwer has struggled to find his rhythm this season. Brouwer has played with rotating linemates throughout the year which changes his role from one game to the next.

Though Brouwer offers no excuses, the lack of continuity with his line has affected his play, “You always have to change your game. You always have to evolve, depending on who you’re playing with. [The team needs] a little bit different role for me this year, and I’ve got to get better at what my linemates need me to do.”

There are many reasons an athlete may over-think in competition, such as trying to do much, being nervous, attempting new skills, correcting previous mistakes, focusing on personal statistics and feeling uncomfortable in his role on the team. To overcome the problem of over-thinking in competitions, you must uncover the reason for over-thinking.

There are several things you can do to overcome your over-thinking and “play your game”:

Remember, your level of play is your responsibility. The choices you make will reveal themselves in your performance.